Top 10 'BIG THINGS' To Visit In The North Island

Te Puke is the home of New Zealand's world famous Kiwifruit. Looking for a seasonal job or a bit of quick work? There is plenty of work in Te Puke all year around but especially between the months of April - August. Stop by and check this place out. Lots of camping options and motohome parks for longer stays. Find out about all sorts of seasonal jobs in New Zealand here Backpackers Backyard

Kaipara is home to New Zealand's most recent BIG Thing. The horizon sculpture was created in 1994 by New Zealand artist Neil Dawson and it sits on Gibbs Farm along with 22 other mind blowing, and mostly BIG sculptures from other famous artists.

Gibbs farm is owned by one of New Zealand's richest businessman Alan Gibbs who opens it to the public only a few times a year by appointment only. Entry is free but bookings are essential and fill up fast. To book a visit or to view all the Gibbs Farm sculptures check out their website Gibbs Farm. Here are just a few of them. 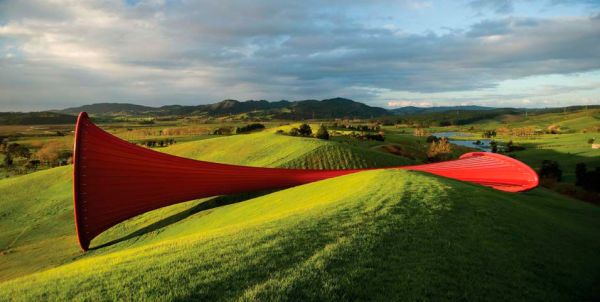 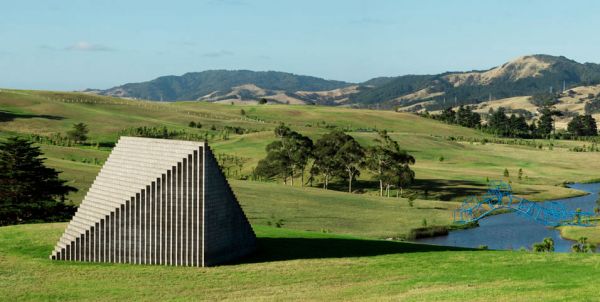 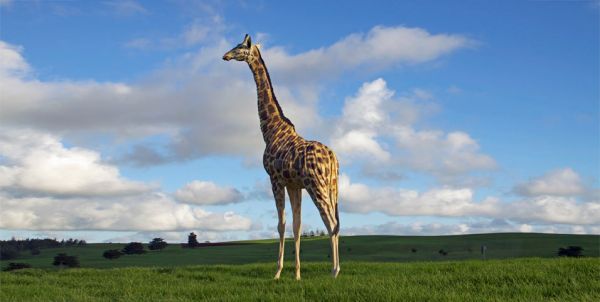 YES, even a Giant Giraffe by Jeff Thompson

New Zealand has their very own soft drink brand called L&P which stands for Lemon and Paeroa. What does Paeroa taste like you might be asking yourself? Paeroa is actually the name of a small town in the Waikato where L&P was first created.
L&P, according to its catchy advertisement slogan, is 'World Famous In New Zealand' The Giant L&P bottle in Paeroa marks the place where it was first manufactured. This is one of the original BIG THINGS of New Zealand that you simply need to have a photo of.

Tirau is an essential stop off place in the middle of the north island on state highway one between Taupo and Hamilton or on the way to Auckland. Tirau has many excellent choices of cafes and is well known for its antique and souvenir shops. Of course, it also happens to be where you'll fi The BIG sheep and BIG sheepdog which are in fact a wool shop and the tourist information centre respectfully. These works of art were the first of many for Tirau artist Steven Clothier whose colourful corrugated creations can be found all over New Zealand and now the world, and Tirau has since become known as The Corrugated Capital of the world.  Keep an eye out for more of Steven's creations on your travels.

Another one of Steven Clothier’s creations can be found at both entrances to Otorohanga. Otorohanga is famous for it’s Kiwi House which is probably the best place to view a real life Kiwi (and other native bird species) in New Zealand.

Not far from Otorohanga and on the way to The Waitomo Caves is the BIG APPLE cafe. Which, as you can imagine, is unmissable as you drive into Waitomo. Stop here for a hot drink and... an apple!

Taupo is a simply beautiful place and is a stop off place not to be missed. The lake itself has a perimeter of approx 190kms and cycling around it is a very popular thing to do. Taupo hosts both the New Zealand Ironman and The Great Lake Cycle challenge and so what more a fitting place to erect a GIANT bicycle. A fantastic photo opportunity but be careful climbing it!

South of Taupo and at the base of Mounts Ruapehu, Ngarahoe and Tongariro lies Ohakune a small town famous for its carrot production. So what do you do if your town is famous for Carrots? You put up a giant one of course!

Ohakune is an awesome tourist spot situated right in the middle of the volcanic Tongariro National Park with views of all three of the park’s mountains, which are in fact each one a volcano. In the summer time, it's a popular stopping point for those walking the Tongariro crossing but in the winter it's population explodes for the ski season which makes Ohakune a really vibrant and fun place to be. The bars and cafes here are all really cool and as you can imagine are mostly full of skiers and snowboarders, bums, tourists, students, and backpackers.

There are plenty of backpackers or hostels to stay at in Ohakune or for a more rustic approach check out the numerous DOC camping grounds in the area. If you are looking for a bit of winter work Ohakune would be a good place to try your luck. Get there early, before the ski season starts, and meet some of the locals.

Gumboots, as they are known here in NZ, are quintessential items to most New Zealanders. ‘If it weren’t for your gumboots where would you be?’ sang Fred Dagg.

Here in Taihape they love em so much they nicknamed the town The Gumboot Capital Of The World! If you’re lucky enough to be here on Gumboot Day you would be very privileged to watch the town’s official gumboot throwing contest!

Welcome to Te Kuiti home of the NZ Shearing Championships. Te Kuiti happens to be nicknamed...you guessed it,’The Sheep Shearing Capital of the World”. If this sport ever made it to the Olympics New Zealanders would be sure to take home many medals. If you’re around the Te Kuiti way during the championships come and ‘shear’ in their celebrations, but if you miss it well hey, there’s always the BIG Shearer Sulpture to take a picture of.

Coming up next...the Top 10 BIG THINGS to see in the South Island...
Want to read more of our interesting articles on what you can discover on a motorhome journey in New Zealand? Register for our newsletter or Like our Facebook page we'd love to have you join us!