Top 10 'BIG THINGS' To Visit In The South Island 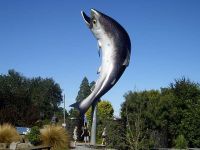 If you’re tripping around the South Island in a hire campervan, Kaikoura is a spot you will no doubt be visiting. Famous for its marine mammal encounters and whale and dolphin watching, it’s also one of the best places in New Zealand to sample crayfish. Kaikoura in the Maori language signifies 'kai' food and 'koura' crayfish and it’s here we find another of NZ’s Big Things – The Giant Crayfish – which sits on the roof of the Waipapa Bay Camping Ground’s crayfish shop on SH1. Registered campers here get a a $5 discount off each crayfish purchased!

I can hear you asking yourself why on earth did they erect a big donut? Simpson fans might easily guess. The town of Springfield New Zealand shares its name with that of the fictional town of Springfield, home of the Simpsons. Originally erected as part of a massive worldwide marketing campaign for the launch of The Simpsons Movie.This locally made, giant, pink frosted doughnut, which was only supposed to be up for a few months, has now become the pride and joy of the Springfield locals (all 291 of them). Actually I’m not sure that everyone there would consider it their ‘pride and joy’ but hey bythe last account The Big Doughnut is still up and so still on the list of NZ Big Things.

If you’re coming to New Zealand to do a spot of trout or salmon fishing you won’t be disappointed. You’ll be spoilt for choice as our freshwater rivers and lakes and full of giant trout and salmon. However, the only place you’re going to see a 12-metre Salmon is in Rakaia on the Canterbury Plains, SH1 just 50k south of Christchurch.

Colac Bay is one of New Zealand’s southernmost surf spots. The popular surf break here is known as Trees and it’s a spot that can hold some big waves! The town has a cafe, craft shop, pub, and a caravan park, and features a statue of a giant surfer riding a wave. Prepare to go big here!

Cromwell is situated in central Otago on the road between Wanaka and Queenstown . Cromwell has a giant reputation as a fruit growing area and is known as the ‘fruit bowl’ of the south. What better way to show how BIG they are on fruit than by putting up a 13-metre giant fruit sculpture!

Every small town in New Zealand claims to be BIG for something. Gore claims to be the “Brown Trout Fishing Capital of the World” and has a enourmous reputation for fly fishing. However, there is more than one reason to visit Gore! The towns other claim to fame is that it is the official home of country music in New Zealand. Yes, Gore is where you would meet a true NZ cowboy especially if you happen to be here during the New Zealand Gold Guitar Awards and line dancing competition which are held each year in June. Check here for dates.

If you haven’t yet been bitten by our wee friend, the NZ sandfly, you will be by the time you reach Pukekura on the westcoast. The South Island is notorious for these namu (Maori for sandfly) so don’t be surprised. You could be greeted by small clouds of them everywhere you go. But they do make up part of your whole New Zealand experience, and you can’t get rid of them so why not embrace them instead? That’s what the Bushmans cave did by mounting one above their door! Pukekura boasts a population of approx 5 people who make up the township. The Bushmans Cave is the place to stop between Hokitika and Franz Joseph Glacier on SH6. They offer accommodation and have some campervan emplacements as well as a café, pub and museum.

Paua is the name all New Zealanders use for what Americans would call Abolone. A Paua is in fact a sea snail. It is considered by Maori a taonga, or treasure, esteemed both as kaimoana (seafood) and as a valued resource for traditional and contemporary arts and crafts. Its iridescent shell is used in jewellery and often represent the eyes in Māori carvings. In an Auckland souvenir shop you could expect to pay as much as 30 NZ dollars for a polished Paua shell whereas in Riverton chances are you will find them discarded on the beach. Look for one when you’re here they make a cool free souvenir and they don’t taste bad either. Try a Paua fritter at your local fish n chip shop and don’t forget to snap a pic of The Big Paua, a 4 metre high shell and the icon of Riverton!

Seize this selfie-worthy stop-off opportunity. See the big sausage in the small town of Tuatapere. The town had an epiphany after winning a “Best Sausage” in the country contest and decided it wanted to be known as the sausage capital of NZ!. In Tuatepere however, the sausage is just the bonus as most people will be coming here to walk the famous Hump Ridge Track - a 3-day  61km loop walk offering sub-alpine views and rugged coastline.

Ok so its not quite the Hollywood sign but it’s still pretty cool and the views from the top are amazing. Alexandra in central Otago is known as the hottest, driest and coldest town in New Zealand. How can that be you say? Well its all due to its location – a basin surrounded by mountain ranges. With all its rivers, lakes, valleys and mountains there are lots of things to do in Alexandra and it’s worth finding a place to park your motorhome here and taking a day out to explore.  Walk the track and visit the BIG clock, you won’t be disappointed and you’ll be ticking off another of NZ’s BIG THINGS

Want to read more interesting articles on what to discover on a motorhome journey in New Zealand? Register for our newsletter or Like our Facebook page we'd love to have you join us!